The Columban Way through Switzerland is part of the European cultural route Via Columbani. Via Columbani is intended to retrace the route that the Irish monk Columban and his 12 companions hiked from Bangor in Northern Ireland to Bobbio in Northern Italy at the end of the 6th century.

In Switzerland and Austria, three places in the biographies of Columban and Gallus are mentioned by name where the monk group stayed: Tuggen on the (then) upper Lake Zurich as well as  Arbon and Bregenz on Lake Constance.

When determining the route through Switzerland, we assumed that at that time hikers would follow the rivers and Roman roads. That is why the Rhine from Basel to Koblenz, the Aare to Baden and the Limmat to Zurich (then Turicum) were obvious. From Zurich, Tuggen could be reached by ship or along the lake shore. They reached Arbon via the Ricken and through the Toggenburg – St. Gallen was only later built at the site of the Gallus hermit’s cell. They probably took the ship from Arbon to Bregenz. From Bregenz and southern Germany to Italy there were Roman roads through the Rhine Valley and over the Alpine passes (Lukmanier, Splügen, Septimer). The most direct route leads via the Lenzerheide and the Septimer Pass to Chiavenna.

Hiking on the Columban Way through Switzerland – Vorarlberg – Principality of Liechtenstein

First, I’ll introduce you to hiking trail signaling in Switzerland. 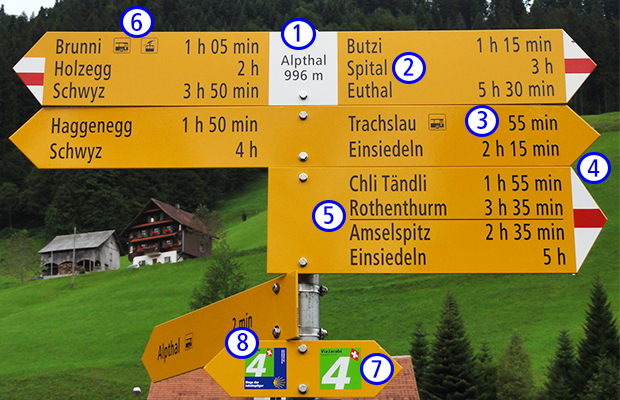 2. Hiking destinations
If several destinations can be reached in the same direction, the nearest ones are listed at the top.

3. Hiking time (without breaks)
Time information can be found at all starting and ending points as well as intermediate destinations of a walking route. Directional signposts (i.e., signposts without destination information) are used for pathfinding at path branching and have no time information.

4. Road category
The degree of difficulty of a path is clearly visible thanks to the signaling: There are different routes (yellow) and mountain trails (white-red-white).

5. Hyphen
If there is a route branch later, this is indicated by a hyphen.

6. Symbols
On the signposts and directional pointers they point the way to a public transport, viewpoint, barbecue or restaurant.

7. Direction pointers / intermediate marks (see examples below)
These signposts without destination and time information (only yellow boards) can be provided with a pictogram (for example hiking) and are everywhere where the further course of the route is otherwise unclear. They are supplemented by the so-called “confirmations” (white-red-white markings, yellow arrows).

8. Green stickers with numbers and route names
They are attached along particularly attractive hiking trails. 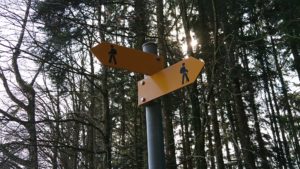 Intermediate marks guide hikers between the signpost locations. They inform about the course of the way and about the category of the way section.

The white-red-white markings confirm the way and the correctness of the orientation of signposts, but do not indicate direction. 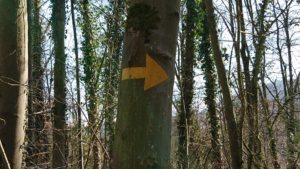 Marks as well as painted directional arrows are affirmations painted on stone blocks, trees, walls, posts and the like.

On our hike we will find the green stickers with numbers and route names (see 8 above) for the following routes:

For the remaining routes we follow the yellow signposts as stated above.

The public transport network in Switzerland is very dense and there are almost at every place rail and / or bus connections to the next town. Timetables can be found at www.sbb.ch/de/fahrplan.html. Buses and trains run almost every hour. Thus, a stage can be abbreviated and the next stage location reached by bus or train.

Also in Austria there is a very good offer of public transport: http://fahrplan.oebb.at/bin/query.exe/dn.